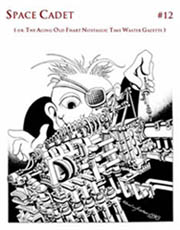 Space Cadet was published in British Columbia, Canada, and is available on-line at eFanzines.com. The first issue was released in December 1994, and issue 19 was released in May 2012.

R. Graeme Cameron had previously published BCSFAzine from 1989 to 1995, and then published WCSFAzine. He began publishing his latest title, The Fanatical Fanactivist, in 2010.