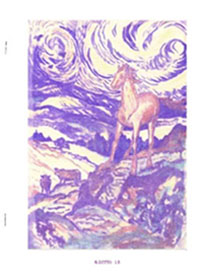 E-Ditto is a fanzine by Eric Mayer.

Previously, Eric Mayer had done the science fiction fanzine Groggy. E-Ditto is more of a perzine, and is an electronic fanzine, available on-line. 13 issues have appeared as of 2011.

Mayer writes about everything from Clark Ashton Smith, to the death of his cat, Sabrina, to the 1960s counterculture paper The East Village Other.

Contributors of writing include Mary Reed and Taral Wayne (DNQ).

Contributors of art work include Pierre Bonnard, Brad Foster, Eric Mayer, Mae Strelkov, and Taral Wayne. Also included are reprints of art work from previous fanzines Eric has done, such as Groggy and Deja Vu, since he is a fan of hectograph and mimeograph art work.