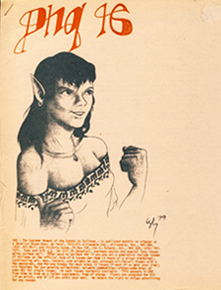 DNQ, the initials standing for "Do Not Quote", was published from April 1978 till October 1984. It was a monthly publication, usually mimeographed in two and three colours. 34 issues were published.

From issues 1-4 the editors called DNQ the "newzine of quintessential faanishness"; and for issues 5-8, "the subjective faanish newsletter' for issue 11, a "subjective fit of extemporaneous faanishness". Issue 12 was an "unauthorized addenda to File 770" (by Mike Glyer).

In an editorial, Taral Wayne writes about the zine, "In a faanish newszine I believe news should be expected to be fluid. We read not a summation of known facts but the process of discovery of the facts...If everybody wants a newszine, nobody seems to want to be the news...On three of four occasions we have been informed that our reportage was uninvited or unappreciated."

In 1980, DNQ was the target of a parody by Jim Shedden, with his fanzine This Sure As Hell Ain't DNQ: Taral Wayne would later contribute to Shedden's zine The Hanged Men Dance, so in all likelihood this was a friendly parody.