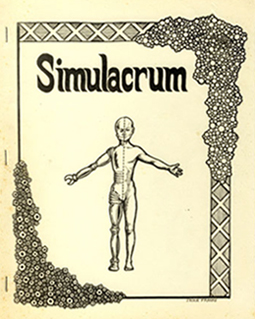 Simulacrum was a science fiction fanzine by Victoria Vayne.

Simulacrum was published in Ontario, Canada. Eight issues were released.

The first issue appeared in June 1975, featuring a front cover by Taral Wayne, and a back cover by Bill Rotsler.

Issue 3, which was also issue 6, of October 1976, featured a front cover by Stuart Gilson, and included the poem "The Evil Eye" by Jessica Amanda Salmonson (Windhaven), and a review by Douglas Barbour of "The Martyrology Books I & 2" by bp Nichol.

The article "But What About Photosynthesis" by Janet Wilson was reprinted in the anthology Toronto the Ghood, edited by Taral Wayne.