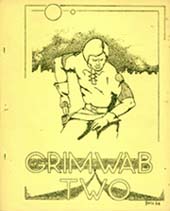 Grimwab was a science fiction fanzine by Harry Bell.

This was Harry Bell's first fanzine, published in the 1960s and distributed by PADS in the UK. The first issue appeared with the fifth mailing of PADS in January 1966.

Five issues were released. The last issue, co-edited with Beryl Mercer (Link, Oz, The Middle Earthworm), who was also a contributor, appeared March 1968.