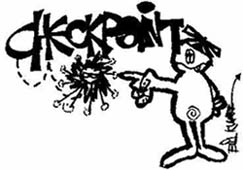 Checkpoint was a science fiction newsletter published by Peter Roberts, then Darroll Pardoe, and then Ian Maule.

Checkpoint was published in the UK in the 1970s. Peter Roberts published the zine from April 1971 till April 1974, when Darroll Pardoe assumed editorship. He remained editor till December 1975, at which point Ian Maule took over till September 1976 when Peter Roberts returned as editor and continued to publish Checkpoint till the 100th issue appeared in September 1979.