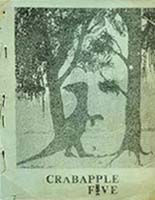 Crabapple was a fanzine by Mary Reed, later Mary Legg, published in the UK.

Crabapple featured the "Tribe X" and "Ulf" fictional tales that Mary Reed had begun in her previous zine co-edited with Beryl Henley, called Link, as well as SF quizzes, humourous quotes from the press, and occasional commentary on music. Unusual for a zine coming from the sf scene, one issue (#6) featured a photo of Bob Dylan on the cover and writing about him. In some ways, this could be seen to be a natural development from the 1950s, when Lee Hoffman had released her sf zine Quandry, as well as her zines devoted to folk music, Caravan and Gardyloo. At that point in time Hoffman had thought it best to keep these interests separate, but in the 1960s Reed saw no reason not to combine the two.

Crabapple developed a 'sub-fandom' of its own, called "Kinkay Fandom", which included Reed, Arthur Cruttenden, Dave Baldock, Beryl (Henley) Mercer, who was now publishing Oz, Archie Mercer, and others.

The tenth and final issue of Crabapple was released in July 1970.