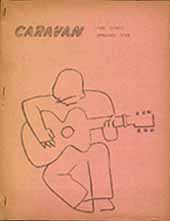 Caravan was a fanzine devoted to folk music published by Lee Hoffman in New York, U.S.A.

With encouragement from friends, folk music fan Lee Hoffman began publishing Caravan in the 1950's, possibly the first fanzine devoted to music. As folk musician Dave Van Ronk, one of the co-creators of The Bosses' Songbook, writes in his autobiography, The Mayor of MacDougal Street, "At that point, there was a great deal of overlap between folk fans, the fringe left, and the sci-fi crowd - all three offered new, interesting ways of looking at the world and a chance to mingle with like-minded souls who were equally frustrated with the monochrome oppressiveness of Eisenhower America."

The first issue of one hundred copies were mimeographed and hand assembled, which were distributed by Lee for free in Washington Square Park. After people started dropping in to The Folklore Center looking for copies, owner Izzy Young asked Lee to let him put Caravan on his counter for sale and the zine took off. Caravan was the first fanzine devoted to music, and one of only two publications being published that were devoted to folk music, the other being Sing Out!, a newsstand magazine.

Dave Van Ronk, quoted in Roots of the Revival: American and British Folk Music in the 1950s (2014), by Ronald Cohen and Rachel Claire Jonaldson, says, "Caravan became our forum, with page upon page of theoretical arguments about the correct stance of the modern urban folk musician or listener. It also served as a sort of club newsletter, with gossip, in-jokes, and commentary of whatever was happening on the Village scene."

Eventually Caravan grew to include articles, columns, letters, reviews, news of coming events and a page of brief "Social Notes From All Over", which consisted mostly of the goings-on of the Washington Square crowd. Roger Abraham was the record review editor and Kenneth Goldstein was book review editor. Aaron Rennert and Ray Sullivan contributed photographs, which were featured on the covers of later issues. Roger Lass and Barry Kornfeld served as assistant editors. Caravan's circulation grew to 2,000 copies an issue, and the only way to keep it going was to have it printed professionally. At this point Hoffman began taking on advertisers to offset the costs of running the zine.

After a few more issues Hoffman decided it was becoming more work than fun so she sold the zine to Billy Faier.

On his website, Faier writes, "In the late fifties I took over CARAVAN, The Magazine of Folk Music from Lee Shaw...I think I published the very first discography of Hillbilly music with the help of Archie Green. Kennetha Stewart did most of the production work of the six or seven issues I put out. Lee Haring, Roger Abrams, Archie Green, and many other writers and musicians helped me with their contributions of many kinds. No one got paid except the printer, Peter Strauss, who also helped me out whenever he could. At the end he waited a long time for his money. When I finally went to pay him I apologized for making him wait so long. He laughed and said, "At least you paid me. Riverside still owes me fifty-thousand bucks for the folk album covers."

Lee Hoffan started over again with another small mimeographed fanzine called Gardyloo, named after the traditional cry of warning before one dumped a bucket of slops out of an upstairs window.