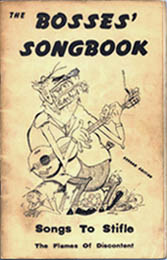 The Bosses' Songbook was a satirical one shot zine created by Dave Van Ronk and Richard Ellington and published by Pat and Dick Ellington.

It was a multigraphed publication subtitled Songs To Stifle The Flames Of Discontent, and called itself "a collection of modern political songs of satire". It was conceived of as a satirical capitalist parallel to the IWW's Little Red Songbook of "Songs to Fan the Flames of Discontent".

The dedication was also satirical and read, "To Our Constant Companion - J. Edgar Hoover". J. Edgar Hoover was the head of the Federal Bureau of Investigation in the U.S.A. and was well-known to frequently target political dissidents to spy on, who would then be 'blacklisted'.

It was published in New York City, New York, U.S.A.. Released in 1959, the first edition sold out and a second edition was published the same year.

In Dave Van Ronk's preface to the first edition, he states, "These songs have been written and passed along by people from every conceivable political and apolitical tendency and sometimes they don't even express the serious views of the writers themselves. They are strictly for the hell of it, and unless the reader approaches them in this same spirit, he will become either very angry or very confused, or both. Actually though, we couldn't care less how angry or confused (or both) you may wax. We get a kick out of singing these songs and we think a lot of other people will too."

The preface of the second edition goes on to say, "When we put the first edition together, things were pretty confused and the political climate was somewhat different so we left out credits entirely". With this second edition, credits are included, and the contributors were Dave Van Ronk, Roy Berkeley, Larry Block, Shel Deretchin (Variant World), Marty David, Sandy Cutrell, Dick Eney (editor of A Sense Of FAPA), Lee Hoffman (as 'Lee Shaw', her married name) (editor of Caravan, Gardyloo, and Quandry), Barry Kornfield, Jules Greenstein, Bob Brill, Frank Hamilton, Marty Juvovsky and Ed Jancke. The cover was by Vince Hickey, with inside illustrations by Trina Robbins (as 'Trina Castillo', her married name), Lee Hoffman and Pat Ellington.

Lee Hoffman recounts in her memoirs, "The politically-oriented organization called The People's Artists put out a folkmusic magazine called Sing Out, and had published a mixed collection of traditional folk and political songs titled The People's Songbook. A lot of political songs, and satires on them were performed in the Square. Some of the best satires were written by Roy Berkeley, who played guitar, showed up regularly at gatherings, and frequently argued politics with Dave Van Ronk."

According to Dave Van Ronk's biography, The Mayor of MacDougal Street, the genesis of The Bosses' Songbook began with Roy Berkeley, who had written several parodies of old folk songs, and was introducing them as coming from "The Bosses Handbook".

Lee Hoffman continues, "One evening, Dave (Van Ronk) came by with Larry Block. While we were gabbing one of us came up with a line or two of satire on a union song. That immediately led to several satires such as The Twelve Days of Marxmas and The Fink's Song. We decided there should be a collection called The Bosses' Songbook. Dave followed up by getting together with Dick Ellington and actually producing a chapbook of the stuff we'd written that evening and some satires that had been around a while. It sold out so quickly that they developed a larger fancier second edition."

Edith Fowke, in her article "Filksongs As Modern Folk Songs" from Canadian Folklore Canadien, vol. 7 (1985), writes about Juanita Coulson's thoughts on The Bosses' Soungbook, published in Kantele #1 from 1978; "Many fans use the term "filksong" very loosely, apparently meaning any modern set of words with a familiar tune. For example, Juanita Coulson, well known singer-composer, referred to The Bosses' Songbook, a small typescript pamphlet produced by Richard Ellington in the 1950s, as the earliest filksong collection. It contained satirical verses parodying familiar labour songs but had nothing to do with science fiction."

Richard Ellington was a member of the IWW, as well as a science fiction fan who also released the SF fanzines Fijagh and Metrofan. Dave Van Ronk was a well known folk singer of the 1950s in New York City and a columnist for the folk fanzine Caravan.