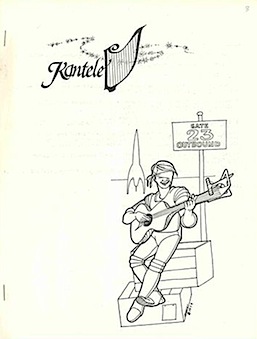 Kantele was a fanzine devoted to filk music by Margaret Middleton.

Margaret Middleton began published Kantele, subtitled "A Filksing Fanzine", in the U.S.A. in 1978, and it is widely regarded as being the first zine devoted to filk culture. The first three issues of this mimeographed zine were made in collaboration with Clif Flynt, and the rest by herself. It ceased publication with issue 14, published in Winter 1984/1985.

Edith Fowke writes in her article "Filksongs As Modern Folk Songs", "...Kantele reproduces songs that are already popular, along with news, reports and articles about filksinging."

Contributors included John Hall, writing "Tips for the Neo Filker" on "How to Become Big-Time Filksinger", advises, "If fellow singer screws up a song (doesn't sing it the way you do) always correct him loudly. He should appreciate constructive criticism. On the other hand, if someone tries this on you, as superior look and a knowing reference to the folk process will cow all but the most obstinate heckler."

Margaret Middleton also organized (with Curt Clemmer) and co-chaired the first filk convention, FilkCon 1, in the Chicago area of Illinois, U.S.A. For her contributions to the world of Filk, Margaret Middleton was inducted into the Filk Hall of Fame in 1997.