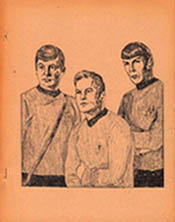 ST-Phile was published in Indiana, U.S.A., and was first released in January 1968, during the broadcast of the original Star Trek television series. It was a mimeographed publication of 29 pages, and was entirely non-fiction, featuring articles, essays, verse and art work.

The second issue was released in November 1968, and is 44 pages.