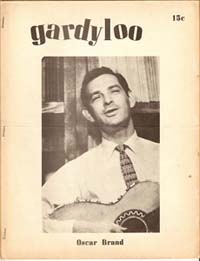 Gardyloo was a folk music fanzine created by Lee Hoffman in the 1950s in New York City, NY, U.S.A.

Lee created Gardyloo after her previous fanzine, Caravan, became so successful that she found it difficult dealing with advertisers. It was a mimeographed fanzine that ran for six issues. By issue 5, published in 1959, it consisted of 26 pages and was duplicated on various colours of paper. it was subtitled, "The Magazine of War to the Death, With a Cast of Thousands". Lee stopped publishing Gardyloo in 1960.

Gardyloo was one of a handful of fanzines devoted to folk music that were published in the 1950s and 1960s, along with Canada's Hoot, Sing and String, and Singalong!; the U.S.A.'s The Broadside of Boston, Caravan, The Little Sandy Review, The Songmakers Almanac, and Tune Up; in the UK, Noise Level by John Brunner, Rambler by Michael Moorcock; Folk Scene arrived in the 1960s, and Folks in the 1970s.