The Broadside of Boston 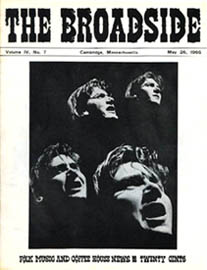 The Broadside of Boston
Volume IV, No. 7 May 1865
Cover featuring Phil Ochs

The Broadside of Boston was a fanzine devoted to folk music.

Founded in 1962 by David Wilson, The Broadside of Boston was published in Cambridge, Massachusetts, U.S.A. Broadside, as it was commonly known, was an 11" X 8.5" sized publication. The first issue appeared March 9, 1962, and was a hectographed fanzine. It began with around 10 pages in 1962, and increased to 20 pages by 1965.

By the end of 1962 it had acquired the subtitle, "Boston's Folk Music and Coffee House News".In 1963, it was edited by Lynn Musgrave. By 1965, the editor was again Dave Wilson. The last issue, Vol. 6, No. 23, appeared in October 1967, at which point it merged with an underground newspaper.

Also included were words and music to songs by Mark Spoelstra, Boot of Blue by Eric Anderson, Ramblin Boy by Tom Paston, Holy Modal Blither by Peter Stampfel, and Ramblin' Round by Dave Wilson.

Art work was contributed by Omar.

Photographs were by Rick Sullo.

Letters came from Mel Lyman, and Mark Spoelstra, among others.

The Broadside of Boston was one of a handful of fanzines devoted to folk music that were published in the 1950s and 1960s, along with Canada's Hoot, Sing and String, and Singalong!; the U.S.A.'s Caravan, Gardyloo, The Little Sandy Review, The Songmakers Almanac, and Tune Up; and Folk Scene in the UK.