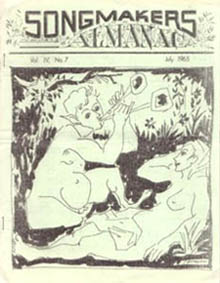 The Songmakers Almanac was a fanzine devoted to folk music edited by Bill Wolff.

Published by Songmakers Inc. in Santa Monica, California, U.S.A., this was a stencilled periodical with a small circulation. It was generally 18 to 22 pages.

The fanzine contains articles and reports on the folk scene in Santa Monica, the Ash Grove folk concerts, notices about hoots and workshops, brief discussions of topics of interest to songwriters, and a report from the Songleaders Workshop.

Contributors included Waldemar Hille, writing in response to an article about Woody Guthrie in an issue of The Broadside of Boston.

The fanzine also featured lyrics and melody lines to folk songs, such as Little Old World by Dave Arkin, MacNamara's Banned by Ralf Jennings, Walk to Montgomery by Jules Kogan, Rye Whiskey Blues by Roger K. Leib, and The Lady and the Tree by Malvina Reynolds.

The Songmakers Alamanac also contained notices about appearances by unknown performers as well as well know musicians such as Odetta, Peter Paul and Mary, Pete Seeger, The Freedom Singers, and others.

The Songmakers Almanac was one of a handful of fanzines devoted to folk music that were published in the 1950s and 1960s, along with Canada's Hoot, Sing and String, and Singalong!; the U.S.A.'s The Broadside of Boston, Caravan, Gardyloo, The Little Sandy Review, and Tune Up; and in the UK Noise Level and Rambler, followed by Folk Scene in the 1960s and Folks in the 1970s.