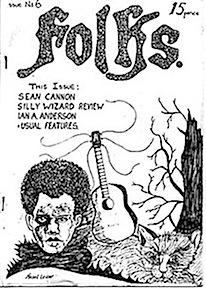 Folks was a folk music zine by Pete Willow.

Also featured were spotlights on local songwriters, such as Rod Felton, Al Goodwin, Dave Parker, and Martin Prue, and their songs were included in the zine.

Contributors of articles included Ben Arnold, Dave Coburn, and Pete Willows, among others.

Ten issues were released before the last issue appeared in 1980.