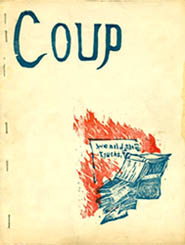 Coup was a science fiction fanzine published by Dave Mason for the 'Coup Group'.

Coup was published in New York City, New York, U.S.A. in the mid 1950s. It was a mimeographed fanzine with a silk screened cover in multiple colors.

Contributors of writing included Dan Curran, and Dick Ellington (Metrofan, The Bosses' Songbook), among others.

'Coup' was subtitled 'The Voice of Fanarchy', and was written mainly by a group calling themselves the "Fanarchists". Charles Freudenthal, in el, Vol. 2 # 1 (January 2003), describes the group; "The perps were Dave Mason, Dick Ellington, Dan Curran (at that time 16 but looking like a dissipated 30), myself, and miscellaneous others. On the dilapidated couch a rangy young man with hair falling over his eyes was singing the blues and accompanying himself on the guitar. I resented the racket because I thought he sounded amateurish. His name was Dave Van Ronk."

Dave Mason was always somewhat wild and scruffy looking. (Pronouncedly Welsh. He once inadvertently, told me his real name but I have forgotten it! ) He later became a successful science-fantasy writer.

The only Fanarchist meeting I remember was in Mason's basement flat in lower Manhattan. I don't recall any business. It was really a party."