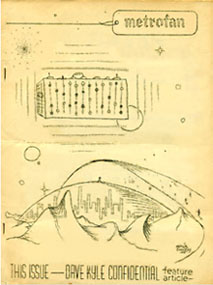 Metrofan was a science fiction fanzine by Dick Ellington and David McDonald.

Metrofan was published in the 1950s as an "unofficial publication of the New York Fandom Council, composed of Circle, ESFA and Lunarians - three first-rate stf clubs in the New York Area'. It was a mimeographed, stapled publication of 20 to 27 pages. The issues from #1 to #5 were edited and published by Dick Ellington with the later issues, #6 to #10 released by David McDonald. Issue #1 was released in 1957, and the last issue, #10, was published in 1958.

Dick Ellington, with Dave Van Ronk, was also the creator of The Bosses' Songbook.