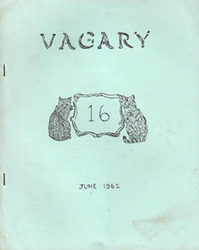 Vagary was a science fiction fanzine by Roberta Gray (1921-1992), previously known as Roberta Wild, and commonly known as Bobbie Gray.

Vagary was published in London, England, UK. The first issue came out in August 1956 and Roberta Gray continued to publish it until the 1970s. The last issue, #32, appeared in 1976, after two decades of publication. Vagary was an APAzine, distributed by the Offtrails Magazine Publishers Association (OMPA), for which Gray also edited the official organ Off Trails.

The June 1962 issue of Vagary was a more conservative 32 pages.

In the March 1993 issue of his APAzine K32, Vince Clarke describes the contents of the March 1958 issue of Vagary; "Starts off with 10 pages of mailing comments and then 6 pages of general rambling which begins with Richard III ( a favourite subject) and goes on to mention a Sunday Times article on best books of the year, C.S. Lewis, the black market, Germany after the War, Scottish scenery and a family tree of the Gods of the House of Llyr. Then a 17p article on King Arthur, including two more family trees."

Roberta Gray was also one of the editors of Vector for several issues, and also served as Vice President of the British Science Fiction Association (BSFA).