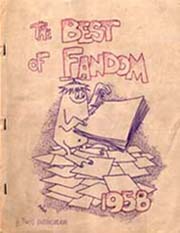 The Best of Fandom 1958
Cover art by ATom

The Best of Fandom 1958 was a science fiction fandom fanzine, edited and published in 1959 by Guy Terwilleger.

The Art Editor was Dan Adkins, and the Assistant Editor was Diane Terwilleger. Its 120 pages are spirit-duplicated (“dittoed”) and only about 100 copies were produced. This was the second ever “fanthology,” a collection made up of the editor’s choice of the best fanzine writing of a given year. In the previous year’s volume Terwilleger didn’t make the calls—he left it up to individual fanzine editors to submit their choice(s) for the best fanzine writing in the 1957 issues of their zines. In his summary for this 1958 volume, he writes that enough good material was submitted by the fanzine editors that he was able to exercise his own editorial judgment about which to use and which to consign to an “honorable mention” page near the back of the book. The introduction to this anthology was written by Robert Madle (Fantasy Fiction Telegram, Fantascience Digest), who was at the time reviewing fanzines as part of his “Inside SF” column that appeared in several of the Robert Lowndes-edited sf prozines.

The fan writers anthologized in this collection are John Berry from The Complete Faan, Cry of the Nameless, and Polarity; Sid Birchby from Ploy; Robert Bloch from Hyphen and Oopsla!; Charles Burbee from Innuendo; Terry Carr from Goojie Publications; Vince Clarke from Aporrheta; Ron Ellik from FANAC; Dean Grennell from Stefantasy; Ted Johnstone (aka Dave McDaniel) from The Incomplete Whimper, Bob Leman from Inside Science Fiction; Nigel Lindsay from Satellite; Sam Moskowitz from Ground Zero; Ken Newman from OB; George Scithers from Yandro; Bob Tucker from Grue; Harry Warner, Jr. from Retribution; Jim Weber from Brillig and Quaqmire; and C.S. Youd from BEM.

In addition, the front and rear covers of the anthology are by ATom, too.