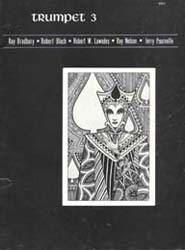 Trumpet first appeared in 1965. It was a lithographed publication that ran until 1969. Ken Keller was co-editor for later issues. Previously Tom Reamy had published Crifanac in the 1950s.

Columns were written by Andrew J. Offut and Jerry Pournelle and fanzine reviews by Alex Eisenstein.

Trumpet also featured an adaptation of Poul Anderson's novel The Broken Sword, done in graphic novel format by editor Reamy and artist George Barr, which was serialized over several issues.

Comic strips were by Gilbert Shelton.

Trumpet was nominated for the Hugo Award for Best Fanzine in 1967 and 1969.

Tom Reamy began writing fiction in the 1970s, and his first novel Blind Voices was published in 1976. He died suddenly the next year in the midst of writing his second book.