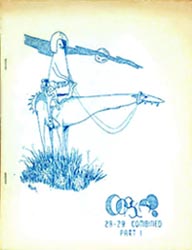 Oopsla! was a science fiction fanzine by Gregg Calkins.

Thirty issues of Oopsla! were published in the U.S.A., beginning in the early 1950s. The first twenty issues appeared between January 1952 and January 1956, after which Gregg took some time off and returned with a new issue in March 1957. Another nine issues were released between then and October 1959. An interim six page issue was published in March 1960, and then the 30th and final issue was published September 1961.

The article "Bah! Humbug!" written by Robert Bloch for Oopsla! issue 25, 1958, was included in the fanzine yearbook, The Best of Fandom 1958.

The article "The Iron Curtain Drops" written by Bob Tucker of Oopsla! issue 9, 1953, was reprinted in Terry Carr's Entropy.

Science Fantasy News #15 said Oopsla!, "...has some of the best fan writers, is one of the ’zines no self-respecting fan should miss."