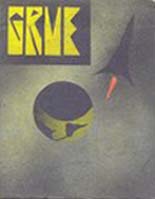 Grue was a science fiction fanzine by Dean Grennell.

Grue featured multi colored silk screened covers and was otherwise mimeographed, using the Gestetner. First published in 1953, it began as a letter zine to keep in touch with friends, and grew from there. By issue 18, it was also a Fantasy Amateur Press Association publication. After five issues distributed by FAPA, it became a general zine for issues 23 through 29. Issue 30 marked a return to FAPA distribution for a run of over a dozen more issues.

Dean Grennell describes picking his title; "In casting about for a fanzine title, I considered several: STELLAR STORIES, FIASCO, and GRUE were three I kept coming back to...I asked the advice of friend-and-mentor Bob Silverberg and he opined that either FIASCO or GRUE would act as a deadly blight on a fanzine. Despite this, perhaps even because of it, I clung to GRUE as a title."

Contributions of artwork were by Ron Fleshman, Damon Knight, Bill Rotsler, Arthur Thomson (The ATom Anthology), and the editor.