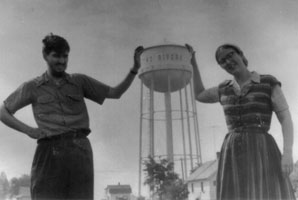 Jean Young was a fanzine editor and artist.

Best known as a Fanartist, in the 1950s Jean Young was also well known in Science Fiction Fandom as one of the "Balcony Insurgents" of the 1956 NYCon II Worldcon, who occupied a balcony along with Ron Ellik, Dick Eney, Boyd Raeburn, Larry Stark, Bob Tucker, Ted White, and husband Andy Young, rather than pay an exorbitant price to hear talks in the banquet hall.

Garage Floor was published by Jean Young and Larry Stark in Cambridge, Massachusetts, U.S.A. The first issue appeared April 1957, and was distributed by the Fantasy Amateur Press Association. At least three issues were released.

Larry Stark and Jean Young also did the fanzines The Cambridge Scene and Tra-La.

Jean Young published a number of one shot zines at various times during her publishing career, including Ye Boiffion Boy Birdwatchers' Bugle-Blast in 1957, with Lee Hoffman and Larry Stark, and Jean's husband Andy Young, and ZIUQ, a fanzine of "Artoons" by Jean Young and William Rotsler after a series of captions by Jack Harness, which included "A Fan Art Folio for People Who Hate Fan Art", "A Short Guide to Norman Wansborough", "For Yielding is Sin", "The Leather Couch (Dick Geis)".

With Andy Young, Jean co-edited Vile Deeds At Midnight, and Yobber and, on her own, Jean Young also published the fanzines A Fanzine for Susan Margaret, Gasconade, Lost in the Stars, Roubidoux, Scree, and Sundance.

Jean Young also created a cartoon character named "Yobber", a popular term with an unclear meaning in use within SF fandom from at least 1937. Jean's character first appeared as an illustration in the 1959 first edition of Richard Eney's Fancyclopedia II.