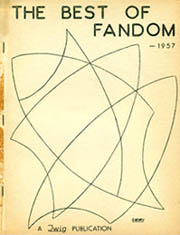 The Best of Fandom 1957 was a science fiction anthology edited and published by Guy Terwilleger.

The Best of Fandom 1957 was published in a limited edition of 100 copies, and was the first "fanthology". It was compiled by the individual fanzine editors who chose what they considered the best writing that appeared in their fanzine in 1957. The introduction was written by Robert Bloch.