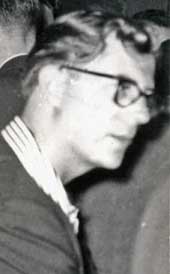 Science Fiction in Ontario centered around the Toronto Science Fiction Society of the late 1940s and the fanzine Canadian Fandom, and called themselves "The Derelicts". They had all but died out when Boyd Raeburn and friends revitalised the Society in 1953, naming themselves "The Derelict Insurgents". They were known for their liking of Beat poetry, jazz, leather jackets and fast cars, aside from all being fanzine editors, writers and artists. Raeburn was also a member of the New Jazz Society of Toronto, a group which included Roger Feather (later editor of Hoot), Dick Wattam, Alan Scharf and Arthur Granatstein, who sponsored the historic Jazz at Massey Hall concert and recorded it, from which came the famous album.

Raeburn's first fanzine, A Bas, was a publication of "The Derelicts" off-shoot group, "The Insurgents". It was originally intended as a one shot to be sent free to all subscribers of Canadian Fandom. The first issue was put together in one night - starting at 3 PM on Saturday, January 23, 1954 and ending at 5AM on Sunday - by Raeburn and friends Albert Lastovica, Howard Lyons (Ibidem), Ron Kidder, Gerald Steward (Gasp!) and Kenneth G. Hall. The rest of the run of A Bas was edited by Raeburn on his own. 11 issues were released, the last in 1958.

The same year as the first issue of A Bas came out, Raeburn released the one shot zine What Things Come Out In The Spring, subtitled "Thot on Canadian Capers"(sic), with a cover by Ron Kidder and Samuel LaSalle. it consisted of a critique of some of the articles in the fanzine Canadian Capers.

In the 1950s Raeburn was well known in SF Fandom as one of the "Balcony Insurgents" of the 1956 NYCon II Worldcon, who occupied a balcony along with Ron Ellik, Dick Eney, Larry Stark, Bob Tucker, Ted White, and Andy and Jean Young, rather than pay an exorbitant price to hear talks in the banquet hall. He was also known for the employment of "Bop-talk" (jazz-associated lingo or slang) in his writings, which gained him the reputation during this time of being "ultra cool", as one fanzine referred to him.

In 1954, Boyd Raeburn coined the term "sercon". As Ted White explains in a letter to And furthermore... # 16, from September 2006; " 'Sercon' was a word coined by Boyd Raeburn in or around 1954. It did not exist before that time. And Boyd coined it as a put-down. "Sercon" was pronounced with a slight sneer - "seeercon". What Boyd was referring to in his condemnation of Serious & Constructive fans/fanzines was their self-importance, their humorlessness and their belief that talking/writing about SF was the highest activity to which one could aspire. Boyd might simply have told them, "Get a life!" - but that phrase hadn't been coined yet."

In 1963 he began working with Norm Clarke and Georgina Ellis (editors of Honque, and Descant) on Queebshots, a series of zines each with their own subtitle. 20 issues of this publication were released throughout the 1960s.

In 1972, Raeburn, along with Norm Clarke and Will Straw, published a one shot called Willard R. Biscuit Newsletter.