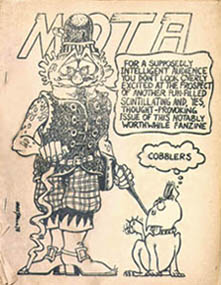 Greg Pickersgill, in Stop Breaking Down #1, writes; "This is a real departure for me; never before have I reviewed an America fanzine, and truthfully I don't knw whether I'm actually doing so now as MOTA is so good I wish it was British...In fact it's the fannish fanzine par excellance..."

Terry Hughes was also one of the editors of Science Fiction Five Yearly, and went on to co-publish Fuck The Tories in the 1980s.