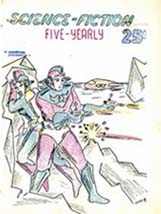 Science-Fiction Five-Yearly (SFFY) was published every five years from 1951 until 2006.

It was originally edited by Lee Hoffman and took on several different editors in several different roles over the following 55 years. Bob Toomey was the first Assistant Editor in 1971, and then Terry Hughes (Mota) in 1976, Dan Steffan (Boonfark) in 1981, and Patrick and Teresa Neilson Hayden (Izzard) in 1986, along with Art Director Stu Shiffman (Raffles). Geri Sullivan (Idea) and Jeff Schalles (Rune) worked on issues #9 to #11, with Andy Hooper (Apparatchik) joining them for issue 10. Terry Hughes returned for issue #11. After Lee Hoffman's death in early 2007, the editors for issue 12, Randy Byers (Chunga) and Geri Sullivan, announced that issue 12 would be the final issue.

Reprints from fanzine such as What About Us Grils?, and others, were also featured.

Science-Fiction Five-Yearly won the Hugo Award for Best Fanzine in 2007.