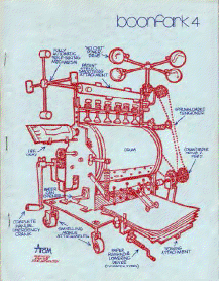 Boonfark was a science fiction fanzine by Dan Steffan.

The first issue appeared in 1974, and the second in 1977. And then Boonfark picked up speed a bit in 1979, and going into the 1980s five more issues were published until, at the end of the run in 1983, eight issues had been published in all.

Dan Steffan was a noted fan artist himself and his zine also contained much of his own artwork, including a 3 part comic strip adaptation of Walt Willis' The Enchanted Duplicator.

Dan Steffan was one of the co-editors of Science Fiction Five Yearly in the 1980s, and went on to co-edit BLAT! with Ted White in the 1990s.