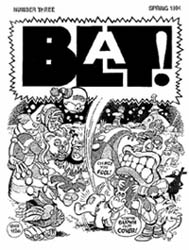 BLAT! was a science fiction fanzine by Dan Steffan and Ted White.

BLAT! was published in Virginia U.S.A. in the 1990s. Issue #1 appeared in Spring 1993. Issue #2 was released in Fall 1993. It also featured a republication of issue #1 of Ted White's fanzine Spung, with contributions from Greg Benford (Void). Issue #3, from Spring 1994, features the until now never-published Egoboo #17 (co-edited with John D. Berry). Issue #4, the last issue, was published in 1995 and featured a republication of Syndrome #5, with contributions from Greg Benford, and Dean Koontz (SF Opinion), and a letter from Gene Simmons (Faun).

Comic strips were featured by Dan Steffan and Tom Foster.

Co-editors Ted White and Dan Steffan had previously published 41 issues of Pong from 1980 to 1992.