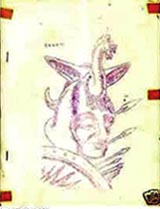 Faun is a comic fanzine by Gene Klein.

Faun was published in the 1960s in New York, U.S.A., by a teenage Gene Klein, who later changed his name to Gene Simmons, and was a member of the band Kiss.

Faun had previously been named Cosmos. It eventually merged with Stilletto fanzine, and became Cosmos-Stilletto with issue #7. It was with issue #13 in 1967 that the title was changed to Faun. By March of 1968, Gene Klein had ceased publishing Faun and had traded his rexograph machine (ditto machine) to Seth Gogramajian, editor of Exile, for a Silvertone guitar amplifier.

It also included "How to Edit a Fanzine" by Randall Harris.