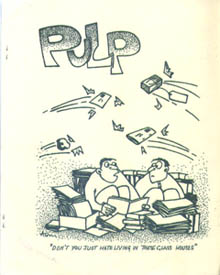 Pulp is a British fanzine with a rotating editorship.

The first issue appeared in June 1986, featuring a cover by ATom, and was edited by Pam Wells.

Issue 2 was released in August 1986, and edited by Vince Clarke, also featuring an ATom cover.

Issue 3, from November 1986, was edited by Avedon Carol and Rob Hansen.

Artwork was by ATom, and Dave Mooring.

With Lucy Huntzinger, Avedon Carol had previously published two issues of the fanzine Rude Bitch in 1983 and 1984, and with Rob Hansen had also published the fanzine Chuch in 1986.

Aside from Chuch, Rob Hansen published Epsilon from 1976 till1985. In 1987, Rob Hansen edited the anthology Now Read On.

Vince Clarke had previously published Science Fantasy News from 1949 as the official organ of the S.F. Society. When the society folded in 1951, Vince Clarke continued to publish the fanzine as an independent publication, and 16 issues were released, the last in June 1960. He also co-edited EYE with Joy Clarke, Stuart Mackenzie, Jim Rattigan, and E.C. Tubb.

Pam Wells also co-edited the one shot fanzine Six Shooter, with Jeanne Gomoll and Linda Krawecke. She later went on to co-edit, with Michael Abbott, and John Dallman, the fanzine Attitude from 1994 till 1997.