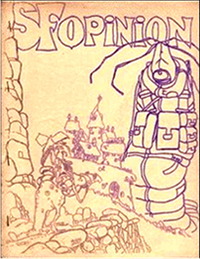 Contributors of cover and interior art work included Vaughn Bode and Dean Koontz, among others.