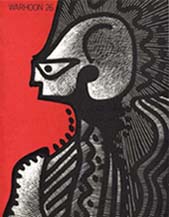 Warhoon is a science fiction fanzine by Richard Bergeron.

Warhoon was initially published in New York, U.S.A. beginning in 1952. Later the editor moved to Puerto Rico, which is where this fanzine was published in the 1970s and 1980s. Some issues were distributed through Spectator Amateur Press Society.

Richard Bergeron was well known in the SF fanzine world as an artist and did illustrations and covers for many zines.

Warhoon number 28 was published in hard cover in 1978 and is a complete anthology of the writings of Walter A. Willis, editor of Slant and Hyphen. The 614 pages of this issue contain all of Willis' columns: "The Harp That Once Or Twice", "The Harp Stateside", and "Twice Upon A Time", as well as other writing.

Richard Bergeron also published one issue of Vox and several issues of Serenade and Wiz.