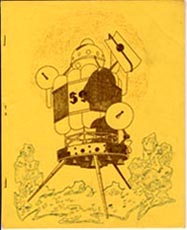 Les Spinge was a science fiction fanzine by Ken Cheslin (1936-2000), who was joined by Dave Hale, and then edited and published by Darroll and Rosemary Pardoe.

Les Spinge was published in the UK, with the first issue appearing in September 1959. The first six issues were released by Ken Cheslin, intended as the organ of the Stourbridge & District SF Circle. Dave Hale assumed editorship with issue 7 with Ken Cheslin as publisher. The 13th issue, published May 1964, was 100 pages and collated in two volumes. The 14th issue, released January 1965, had a black cover, and was assembled with a power drill and used metal binding strips. Only a few issues could be assembled and mailed out a week. Discouraged by the reception to these two issues, Ken Cheslin and Dave Hale handed the fanzine over to Darroll Pardoe and Rosemary Pardoe to edit, and they released slimmed down versions not requiring power drills to assemble. 36 issues were published, with the final issue appearing in December 1979.

After publishing Les Spinge Ken Cheslin, who had also published Nazgul's Bane from 1960 to 1963, remained active in sf fandom, later releasing A Child's Garden Of Olaf and Odds, Sods and Hogwash. Dave Hale quit both publishing and fan activity. Darroll and Rosemary Pardoe had also been publishing Pablo through OMPA at the same time as releasing Les Spinge, and remained active in publishing, with Darroll Pardoe editing one issue of Vector. Rosemary Pardoe had also previously published Seagull, and went on to publish Wark and Ghosts & Scholars.