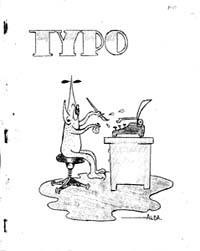 Typo was a science fiction fanzine by Michael Moorcock and Jim Linwood.

Typo was released on London, England, UK, in the Spring of 1957. Only one issue appeared.

Rob Hansen (Chuch), in his chronology of UK fandom, "Then", calls it, "...the most determinedly fannish of all the various fanzines Moorcock was to produce."

The fanzine appeared later than it had been scheduled and announced to appear, and Michael Moorcock offered his reasons in the pages of the fanzine:

"Just recently I've had to rehearse a lot for a recording I did at HMV on the 5th of Feb. -- and when you're trying to cut a 14 verse song down to a 7 verse song so that it'll fit onto one side of a 10" 78, you don't get much time to worry about anything else."

The cover was by Alan Date.

Michael Moorcock went on to edit a number of other fanzines later in the 1950s and then the 1960s, including A Fanzine Called Eustace, Ergo Ego, and the music fanzine Rambler.