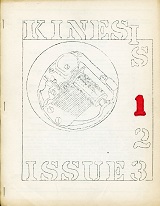 Kinesis was a poetry zine edited and published by Virginia Kidd from Milford, Pennsylvania, U.S.A.

Virginia Kidd had earlier published the fanzines Snarl, an apazine she did for Vanguard Amateur Publishing Association in the late forties, and Discrete, among others.