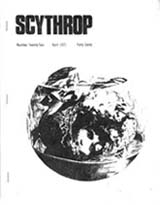 Eight issues were published (#21-28), with the numbering continuing on from The Australian Science Fiction Review.

The fanzine subsequently went into a long hiatus before being relaunched as the Australian Science Fiction Review (second series) in 1986.

Scythrop won the Ditmar Award for Best Fanzine in 1972.