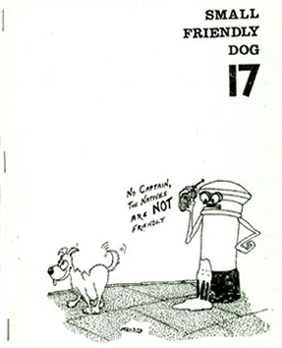 Small Friendly Dog is a fanzine by Skel and Cas.

Small Friendly Dog was published in the UK in the 1970s and 1980s by Paul and Cas Skelton, known as Skel and Cas. It had originally been titled Inferno, the first two issues co-edited with Brian Robinson, until the 13th issue was released in 1976. With the 14th issue, published February 1977, it was renamed Small Friendly Dog, and continued on under that title until 1984, with 24 issues released in total.

Rob Hansen, in Then, relates the reasons behind the name change; "Paul Skelton had often referred to the zine by the latter name within its pages anyway, but he was spurred to drop the INFERNO name entirely when the British Library Board, having somehow learned of its existence, demanded that he send them four copies of all future issues and of every issue to date, as they were entitled to under the Copyright Act of 1911. Skelton replied, truthfully, that he no longer published anything called INFERNO, and that though he distributed copies free of charge and didn't sell any (the act requires publishers to supply copies 'in the like condition as the books prepared for sale') he insisted the personal couriers who delivered them travel in luxury which, of course, the British Library Board would be expected to pay for in this instance."

The covers were done by Skel with the exception of issues 21, done by Dan Steffan (Boonfark), 22, by Harry Bell (Grimwab), and 23, by Arthur Thomson (The ATom Anthology).

In his article in Xenium on fanzines, "I'm Finally Starting to Sort My Zines", Mike Glicksohn writes, " If there was one thing that was more than merely mildly disconcerting in skipping so quickly and lightly through nearly two decades of my most important leisure activity it was the feeling that my fanzine collection was strangely incomplete...I do not want to be missing a MOTA or short a SMALL FRIENDLY DOG or with a gap in my TRUE RAT collection."

The Skelton's fanzine was included in the top 5 Best Fanzines of the Checkpoint 1974-1975 Reader's Poll, and Paul Skelton was one of the top 5 Fan artists.

Paul and Cas Skelton also published The Zine That Has No Name, and Paul Skelton published Hell with Brian Robinson for OMPA.