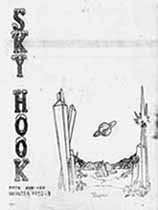 Sky Hook was a Fantasy Amateur Press Association publication that had its premiere in Winter of 1948. Boggs' previous zine Chronoscope was merged into this new title.

Twenty-five issues were published during its run. The last issue of Sky Hook was published in Autumn 1957.