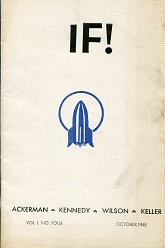 IF! was a science fiction fanzine edited by Conrad ("Con") Pederson and published in the late 1940s from Inglewood, California, U.S.A.

IF! lasted at least four issues. The third issue was published in June 1948 and the fourth in October 1948.

Pederson also edited Snarl, and Morpheus, and was one of the co-editors of The Outlander.