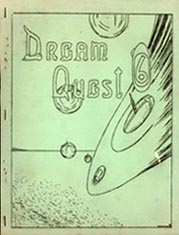 Dream Quest was a science fiction and fantasy fanzine published in the 1940s and 1950s by Don Wilson and Howard Miller in Redlands, California, U.S.A.

Ten issues of this 8 1/2 x 11 inch mimeographed, stapled fanzine were released. The first issue was published in July 1947. The 5th issue was accompanied by Opinion, an 8-page supplement that featured "the results of the 1947 Dreamland Opinionator poll". Issue 11, the last issue, appeared in 1953. A main focus of the magazine was to review the prozines, but it also included articles, essays and poetry.

Poetry was by Lin Carter (Spaceteer) and Genevieve K. Stephens.

Also included is the article "Lovecraft's Unsung Masterpiece" by Gordon Elliot in the 5th issue of April 1948.