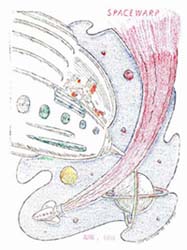 Art Rapp published his fanzine in Saginaw, Michigan from April 1947 until September 1950. Rapp was a member of the Michigan Science Fantasy Society.

Co-editor of the early issues were Bill Groover, with art by Bob Stein and contributions mainly by Wilkie Connor, Jack Clements, and Ben Singer (The Mutant).

Soon, other fans began contributing, with Redd Boggs being one of the first. His column in Spacewarp, "File 13", became well known and anticipated in SF fandom.

After a meeting of the Michigan Science Fantasy Society in November of 1949, two members set off a bomb in the front yard of Rapp's home. Police were called and neighbours gathered, and according to Rapp in an open letter he wrote of the incident, the bomb was heard from two miles away. Immediately after, Rapp quit MSFS but didn't end his zine until the next year, when he left the U.S. for military duty in Korea. He then turned the zine over to F. Towner Laney and Charles Burbee to edit. They put out two issues, the last, in 1950, called the "Insurgent Issue".

During the years 1950-1952, Art Rapp was one of the co-editors of The National Fantasy Fan.

Later, Art Rapp married Nancy Share, editor of Hodge-Podge, Ignatz, and Torrents, and together they co-edited the zine Churn.

In 1983, Rapp resumed publishing Spacewarp as a member of the Spectator Amateur Press Society (SAPS).