Cry of the Nameless 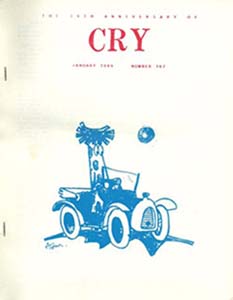 It was begun in the 1950s by F. M. Busby as a club bulletin of The Nameless Ones, a science fiction club in Seattle, Washington, U.S.A. In the mid-50s, the name was shortened to Cry, when the zine editors began publishing more general material and the editors began paying the publishing costs. During that time, it had a reputation as the most 'fannish' fanzine, and was accessible to newer fans, while also including older fans and established personalities such as Robert Heinlein.

It's true success though, was in capturing the lives of the various fans involved in "The Nameless Ones", their meetings, parties, get togethers to make the zine, visits to each others home and their lives, recipes from Elinor Busby, all related to readers from a humorous angle. The circle of people involved included Jim and Doreen Webbert (Por Que?), Vonda McIntyre, Gordon Eklund, Jerry Pournelle; G. M. Carr, Wally Weber and Burnett Toskey, who were also editors at some points in the life of the zine; and the Busbys.

It ceased publication in mid 1964 after the 174th issue, due to Wally Weber's move to Alabama, although briefly making a comeback in the late 60's.

Cry of the Nameless won the Hugo Award for Best Fanzine in 1960.

Elinor Busby also published Fapulous, and the apazine Salud in the 1960s.