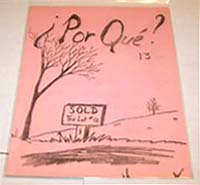 Por Que? was a long running fanzine that was published in the various cities where Doreen moved; from Seattle, Washington, to Akron, Ohio, to Phoenix, Arizona, U.S.A. It was begun in 1960s and continued into the 1970s. Issue 14 was released in 1961 and issue 54 in 1972. At least 66 issues were published.

While Doreen and husband Jim Webbert lived in Seattle they were members of the science fiction club 'The Nameless Ones', and had helped with the club fanzine Cry of the Nameless.

Doreen Webbert also did a fanzine called Slumgullion, and 8 issues of the fanzine Siderite for the November 1972 - January, May, July, September, 1973, and January, and March 1974 mailings of the Southern Fandom Press Alliance.