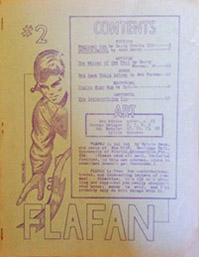 Flafan was a science fiction fanzine by Sylvia Dees.

Published in Gainesville, Florida, U.S.A., Flafan appeared in the 1950s. The first issue was released in September 1957. Two issues were published.

In his introduction for The Best of Fandom 1958, Robert Madle (Fantasy Fiction Telegram, Fantascience Digest) wrote about the fanzines of that year; "There were also some new fanzines. Now, as a general rule, new fanzines do not stand out or make an impression. However, one of the neatest - formatwise - to appear in 1958 was published by a neofan - Sylvia White (née Dees) with Flafan."