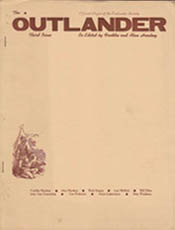 The Outlander was published in South Gate, California, U.S.A. It was the Official Organ of The Outlander Society, a group of fans living in smaller cities and towns outside of the Los Angeles area. Most of the Societies members also belonged to the LASFS, the Los Angeles Science Fiction Society.

All the Outlander Society members took turns editing their fanzine. Issue 2 was released in May, 1949. # 3 was edited by Freddie Hershey and Alan Hershey, #8 by Con Pederson, #9 by Anna Sinclare Moffat and Shirley Booker, #10, released in 1952, was edited by Len Moffat and Rick Sneary. Thirteen issues were published in total.