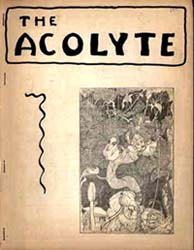 The Acolyte
Vol. 2, No. 1 Fall 1943
Cover Illustration by Howard Wandrei

The Acolyte was a fanzine devoted to H. P. Lovecraft and his circle, published by Francis Towner Laney (d. 1958) in the 1940s.

The first issue appeared in 1942, published in Washington, U.S.A. Editors for the fanzine included Francis T. Laney, Samuel D. Russell, and Duane W. Rimel. Rah Hoffman was listed as Art Director. The first two issues were hectographed and the subsequent issues were mimeographed.

Issue One featured the "Map of Arkham", drawn by H. P. Lovecraft. Other issues of The Acolyte included "The Cthulhu Mythology: A Glossary" by Francis T. Laney, essays by Fritz Leiber about Lovecraft's fiction, as well as fiction in the fantasy and supernatural genres, and poetry. Also featured were contributions by Robert H. Barlow (Leaves) and Clark Ashton Smith, as well as many previously unpublished essays by Lovecraft.

Two works of writing from The Acolyte are considered essential in the creation of the Cthulhu Mythos, including "Music of the Stars" by Duane W. Rimel, and "Horror at Vecra" by Henry Hasse.

Four issues of The Acolyte were published in Washington 1943, and three in 1944. The winter of 1945 saw one issue released, after which the publisher, Francis Laney, moved to Los Angeles, where he released three more issues that year. In 1946 the last two issues were released, making 14 issues in all.