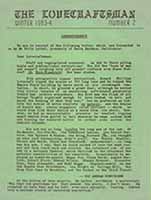 The Lovecraftsman was a fanzine devoted to H. P. Lovecraft that was published by Redd Boggs in the U.S.A.

The third issue came out in Spring, 1964, with an article credited to Arthur Jean Cox.

The fourth issue appeared in Autumn 1965. Boggs ceased publishing The Lovecraftsman in 1965.

The Lovecraftsman was distributed by the Fantasy Amateur Press Association.

Redd Boggs was also the publisher of Chronoscope and Sky Hook, and editor of Shangri L'Affaires for the years 1963-1964.