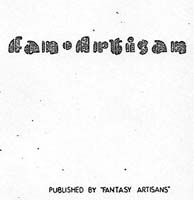 Fan Artisan was a science fiction fanzine edited by Jerri Bullock and Russ Manning in the U.S.A. and published by Fantasy Artisans in 1948.

Manning went on to do the art work for comics, including Dell Comics, and returned to science fiction with the comic series, "Magnus, Robot Fighter 4000 A.D." After this, he did the Tarzan daily comic strip for United Features Syndicate. His last work was on the "Star Wars" comic.