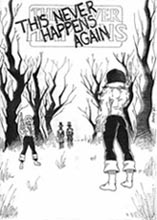 The fanzine was published in the 1980s, in the UK.

Issue 10 featured a parody of Rob Hansen's fanhistory, "Then". The article "The Fan in the High Castle" by Lilian Edwards, Christina Lake and Simon Ounsley, also from issue 10, was selected for reprinting in the anthology Fanthology '87.

Edwards and Lake were nicknamed "the Twins" and stood successfully as joint candidates for the TransAtlantic Fan Fund.